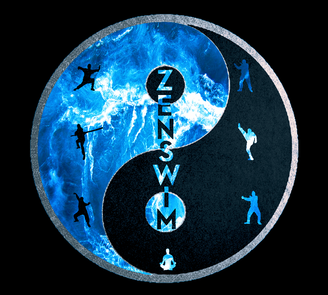 In 2001 I founded the Martial Arts system, 'ZenSwim'. I use Zen/Taoism principles with over 30 years of study and experience of the Martial way. First came up with the name 'Zenswim' while I was a Swimming Coach and Teacher in 2000.( I taught for 6 years)

I started training in the Martial Arts in 1974 with Wu Shu Kwan and onwards with Aikido, Tai Chi, Boxing, Fencing and Yoga. I train in the forest of Sweden and have done this for the last 7years in Winter, Spring and Summer.

What I decided to do was incorporate the philosophy and adapted it from my Martial Arts background and use some techniques of Swimming! I had much success as a Swimming Teacher, many of my students went on to win many competitions.

So it may seem strange to mix Swimming with Martial Arts? All flows in the universe in Circular motion, we Swim/flow everyday on our World,Planet and Universe. As Bruce Lee once said :

So I would say, Be like water, swimming in the Universe of Life!