LETTERS OF THANKS AND REFERENCES 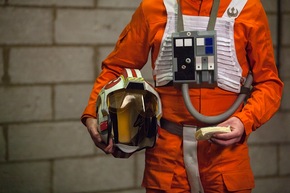 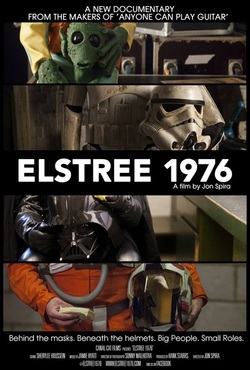 
There are however a portion of these actors who have a sense of elitism. We happen to be close friends with Derek Lyons, an actor who played a small role in Star Wars. We met him a few years ago and he was a delight to be around and wonderful company. He will be in the film and his presence highlights the elitism that some of the actors share. Some believe the ‘extras’ who hared face and screen time in the film, but had no lines, should not be allowed on the circuit and that they are stealing some of their limelight. The politics at play in this film will genuinely interest you and it is for that reason we present this crowdfunding opportunity to you. 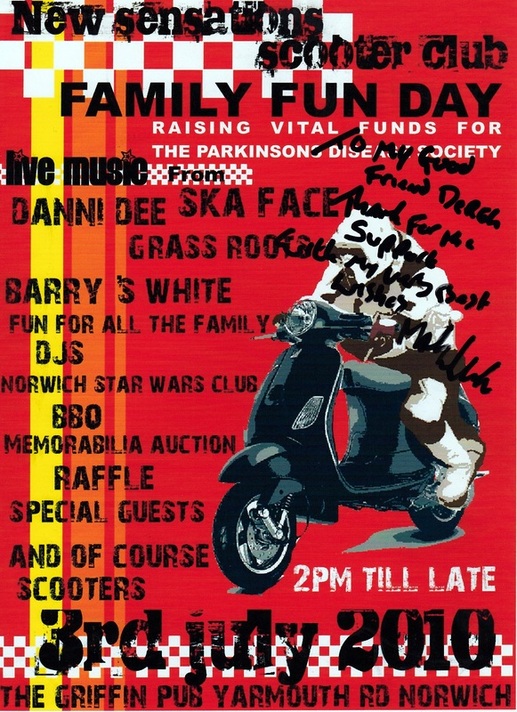 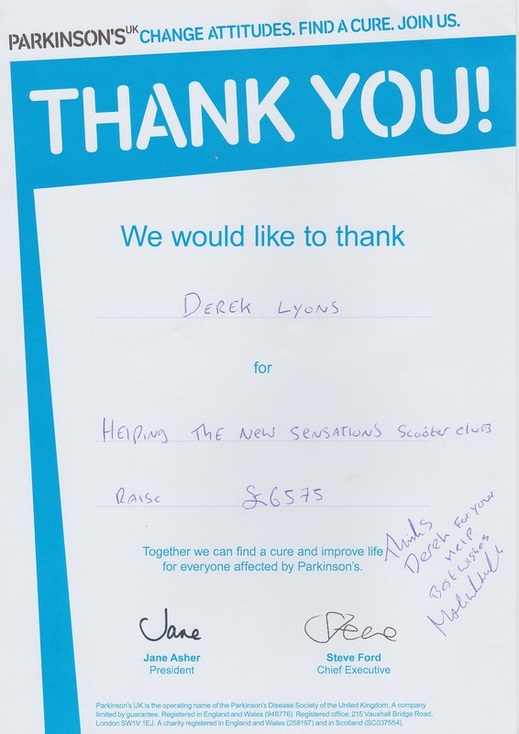 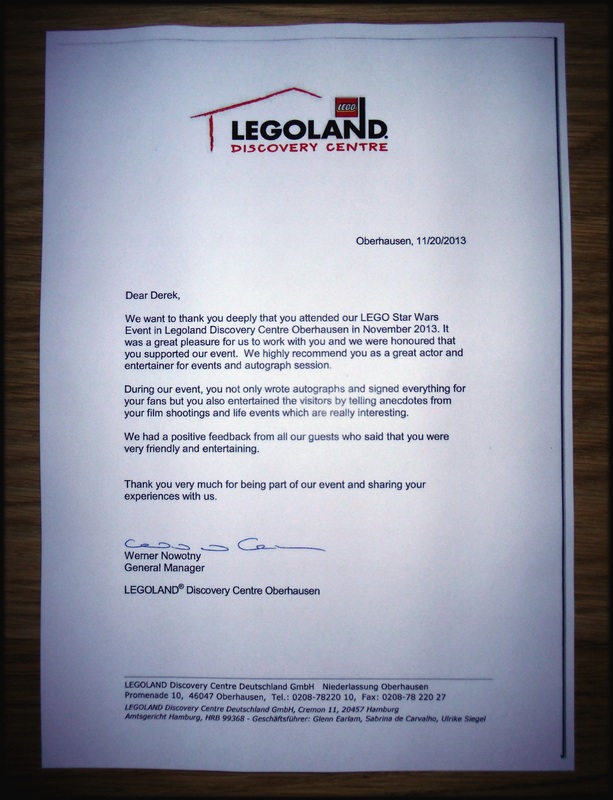 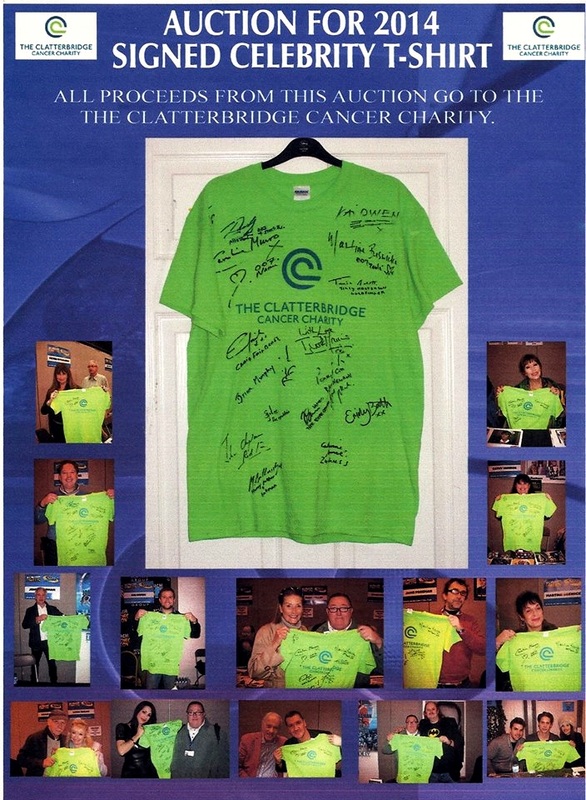 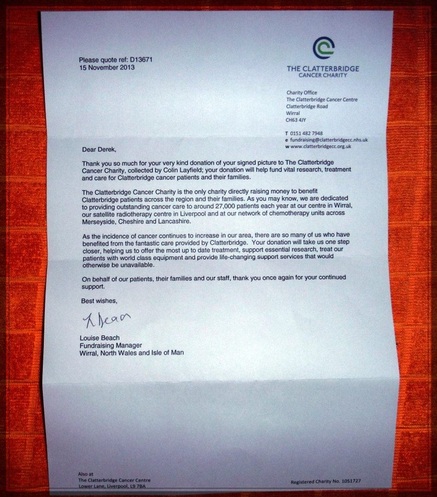 
A letter of thanks from THE CLATTERBRIDGE CANCER CHARITY 2013 for my donations. 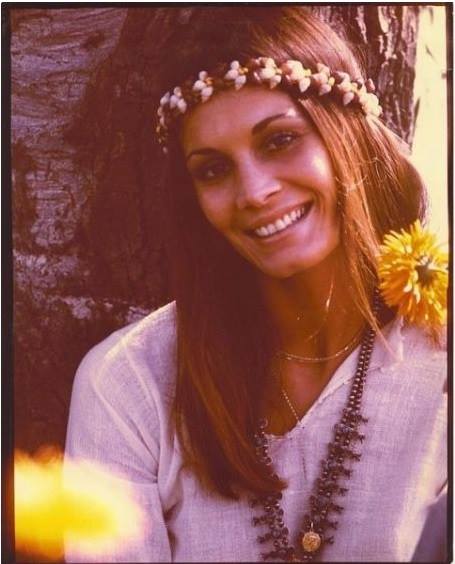 “When God made you Derek he broke the mold!! You are the dearest, Kindest and a good actor amongst my best friends!

Dear Derek, I would like to thank you for attending our fan event. You were a truly amazing guest. Your friendly attitude towards the Star Wars fans that were eager to meet you was a definite contributing factor to the success of our day.I would also like to thank you for the generosity that you showed to me and my family. It was very kind of you to donate items to the charity auction. Over £350.00 was raised for the East Lancashire Hospice.On a personal level, it was a real thrill to finally meet you, and I am proud to now call you a friend.With Very Best Wishes,Yours sincerely,Neil Livesey

in the name of our team let me say again THANK YOU for joining us at JEDI-CON 2008.

It's great that you've had a good time in Germany and you've enjoyed your stay.

You were really great on stage and the people loved you!

In the moment we don't think about Indy or Bond conventions. Thanks for your nice offer to support us.

I will definitely forward Sandra your friendly words regarding her job during the event.

All the best to you and maybe we will see us in the future again,

I am writing to thank you for your very kind and generous donations to the Finn appeal which you handed over at the recent Jedi con.

This was totally unexpected and a very nice surprise, Finn's parents also say thank you as does Finn, she is hooked on Star Wars already!

Everyone has been really generous and the appeal is going really well thanks to the generosity of people like you. We have posted a thank you and a picture on our appeal website which I hope is ok ( www.finnappeal.co.uk)

I am also second in command of a large Star Wars costuming group, www.the99thimperial.com. We are attending a signing event in North Wales in June with lots of other Star Wars actors from the original trilogy and also the new movies including Paul Blake, Gerald Home, Ian Liston, Richard Bonehill and many more. If you like more information and would like to attend let me know and I can put you in touch with the organiser - it would be great if you could make it as we would get a chance to thank you in person plus you would get to meet Finn and her family. The event is on the 6 and 7 June 08 and it will be held in Wrexham, North Wales.

Thank you once again for your support, I here that you are interested in the Elstree Studios event and it would be great if we could see you there too.

Good luck with your future ventures and a very sincere 3rd but my no means final, thank you for your donations and kindness.

fundraiser for the Finn appealwww.finnappeal.co.uk

Report by Lukasz MlotkowskiDusseldorf in Germany was the location for the fifth annual Jedi Con, organised by the Official German Star Wars Fan Club.  This multi-lingual event regularly attracts huge crowds, and this year was no exception, with such luminaries as Stephen Sansweet, Jeremy Bulloch, Daniel Logan, Orli Shoshan, Derek Lyons and Robert Watts attending.

With 2008 being such an important year for Star Wars, this European convention held extra significance and a number of exclusives were wheeled out and revealed to the eager audience.  And, on February 10th 1978 Star Wars was released in Germany, so German fans gathered to celebrate their own 30th anniversary...

Lukasz Mlotkowski, webmaster Imperial City Online and S.W.O.R.A member Lukasz - "Star Wars fans all over the world took part in the 5th edition of the Jedi-Con convention, which took place during the Easter holidays in Düsseldorf. Located within the luxurious Maritim Düsseldorf Hotel, Jedi-Con 2008 was organised to commemorate 30 years of Star Wars in Germany. The event featured many attractions spread throughout 10 spacious areas, offering everything from gaming consoles, Star Wars merchandise, to panels and autograph sessions with the convention's distinguished guests."Lukasz - "The Maritim Düsseldorf Hotel and conference centre, opened in December 2007, served well as the venue for this unique edition of Jedi-Con. Its exceptionally convenient location – approx. 100m from the airport – was no doubt one of the most important features for international fans. Its modern, spacious and well-lit interior allowed the visitors to familiarise with the convention area quite smoothly. Each separate sector was clearly marked, with the floor plan available in the con guide offering additional assistance. The main information area, dubbed Tatooine, housed the store with convention memorabilia, such as the famed Shadow trooper 2-pack, Jedi-Con T-shirts, mugs etc. The large Corellia sector, offering various Star Wars merchandise and other SF items, was a definite point of interest to collectors. Among the popular areas were the fan activities sector (Alderaan) and autograph rooms (Geonosis, Hoth), as well as the Kamino room, which served as the R2 Builders headquarters."Lukasz - "The main auditorium deserves separate attention. Dubbed Coruscant, this great hall – according to official info – measures 2.500 square metres, is 8 metres high, and can easily accommodate 2500 visitors. It features a grand stage and a large movie screen, which – together with the THX audio standard – made all presentations a truly unique experience."Lukasz - "Among the guests of the Jedi-Con 2008 convention were long-time veterans (Steve Sansweet), but also first-time visitors to Germany (Daniel Logan, Orli Shoshan). A very significant portion of the programme was devoted to collecting – panels by Duncan Jenkins, Gus Lopez attracted a great number of fans, and the Star Wars auction conducted by Steve Sansweet was no doubt among the highlights of the convention programme. The convention also featured some great performances by the guests, including the acting workshops conducted by Jeremy Bulloch."Lukasz - "What made Jedi-Con unique was the atmosphere created by fans. The convention rooms were flooded with colourful characters, representing different Star Wars eras, organisations and affiliations. Among some of the most unique creations were the technician outfit from Spaceballs and the complete Tessek outfit. The Alderaan sector featured numerous fan organisations and clubs, among them the 501st Legion German Garrison, The Saber Project and Krayt Riders." Lukasz - "Already an established event, Jedi-Con brought many positive experiences. However, it also had its dark side. One of the most serious flaws on behalf of the organisers was that nearly all important information concerning the purchase of tickets, as well as the attached promotional materials and the con guide itself, were all written in German. English-speaking visitors had to settle for three sheets of plain A4 paper bound with a stapler, which contained the (poorly) translated text of the con guide."Lukasz - "What was outrageous, however, was that the English language was virtually nonexistent also on the main stage. Most of the organisers and hosts were unable to speak a single, correct sentence in English! This led to utterly absurd situations – the information concerning Eric Walker’s absence was announced in German only. Similarly, during the costume contest a participant from Portugal was unable to communicate in English with the host and could not, therefore, describe her costume. Shockingly enough, the introductory Jedi-Con movie was also exclusively in German. English subtitles were not provided."Lukasz - "The controversial idea of dividing the auditorium into sectors pre-assigned to the participants was equally ill-conceived. After attending two of the first panels it became obvious that there was no personnel within the hall to control who sits where. Being given a ticket with sector J (way in the back) ascribed to it, one could take a seat in the front row with no difficulty whatsoever. The liberal approach of the organisers to the rules they laid out themselves, also concerned the ban on photographing the events in the main hall. The main stage was constantly lit by flashes from hundreds of cameras; again, there was no one there to enforce the ban. Assuming this wasn't a last minute decision, one cannot help but wonder, why was it necessary to include the information about the sectors and the photography ban in the first place, if there was no one to enforce the rules?"Lukasz - "Sadly, the Jedi-Con Saturday Night Fever event, one of the highlights of the convention programme, was largely a disappointment. The rather unappealing and chaotic performances by Mr Horst (including his poor attempts at pantomime and dancing) left the audience somewhat disoriented and disgruntled. Ultimately, the day was saved by an absolutely smashing concert by the Sarlacc Survivors, who performed to hit songs, such as “Gimme, Gimme, Gimme” by ABBA, “T.N.T" by AC/DC and “Engel” by Rammstein. Guest star of the concert was Derek Lyons, whose performance on stage awarded him a healthy round of applause."Lukasz - "Luckily, the rather unambitious approach of the organisers and hosts of Jedi-Con 2008 did not manage to ruin the unique atmosphere created by the guests and fans themselves, who proved beyond doubt that no matter what differences, our passion will help us communicate in the spirit of friendship and understanding. These international friendships will be the basis for future meetings, events and conventions, which in turn will allow the younger generations to live through this unique and magical atmosphere of Star Wars, which is only found in the company of fans from all around the world.'' 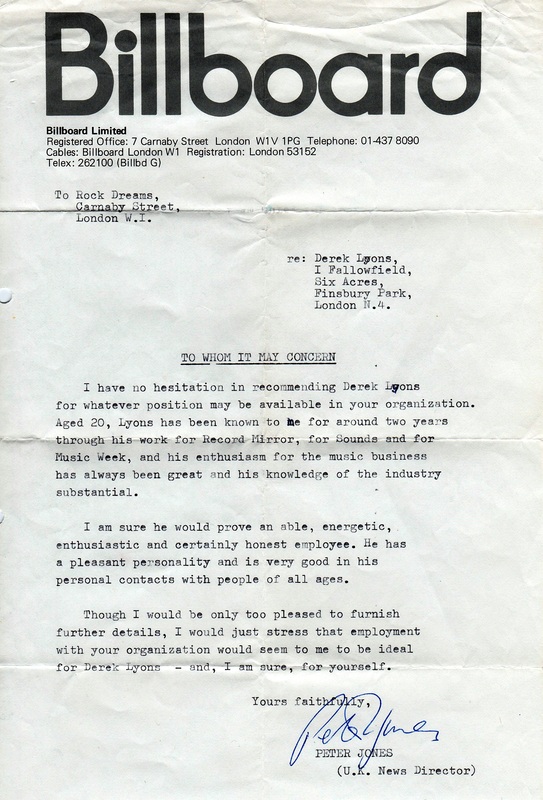